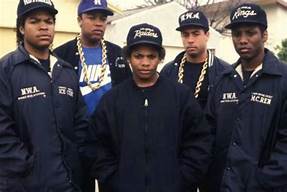 The rap group N.W.A released an album in 1988 called straight out of Compton one of the songs was called Fuck the Police. The rap begins with a mock trial which gives off that they are pocking fun of how ridiculous the judicial system was, especially for minorities. The music that they made was a voice for the people and an outlet to let out their anger. It allowed them to express their point of view and show how life was really like living in the ghetto and not what was depicted in films. In today’s culture people don’t think that Hip Hop and a racial movement go together but, according to our reading “The rage and anger are consistent in the messages and presences of the Black nationalists and rappers. For example, when the Black Panther Party started “policing the police and shouting off the pigs thirty years ago they set the tone for rappers NWA who would later shout Fuck the Police” (285)

During the late 80’s LA had large gang activity and the struggle between these gangs and the police were very high. This song does a good job to capture and give people to this day an idea of how high the tension was. Shortly, after this song was released, On April 29th, 1992, four police officers were found not guilty for using excessive force in the March 3, 1991 arrest of Rodney King, a beating that had been surreptitiously videotaped and then broadcasted around the world. This ruling resulted in rioting all throughout South Central Los Angeles.

Fuckin with me ’cause I’m a teenager
With a little bit of gold and a pager
Searchin my car, lookin for the product
Thinkin every nigga is sellin narcotics

Shows that the divide isn’t only between black and whites but also, they are being brutalized by people of their own color. So, black on black crime was not only occurring within the gains but also with the authority who is supposed to protect. Which shows even deeper that there is racial tension in the police force itself.

The second chunk of lyrics shows the everyday struggles that these young teens hand to deal with in regard to police harassment and racial profiling.

I chose Maters of War written in 1963 by Bob Dylan because the focus of this song is a protest against the Cold War and the Cuban Missile Crisis that was happening during the early 1960’s. This song is different from other Bob Dylan music because he is very vivid in his lyrics about his hatred tone for arms dealers, government and military and their involvement in this crisis.

This song really goes in on the “war masters” with lyrics such as “I hope that you die and your death’ll come soon.” The lyric shows the anger and the lack of tolerance people had for the government and their choices. Bob Dylan goes into saying that not even Jesus would forgive them for what they do. “Though I’m younger than you
That even Jesus would never forgive what you do.” Although these lyrics were written in the early 1960’s they are still valid for what we are going through in society today.

According to the reading Cannibal Culture: Art, Appropriation, & the Commodification of Difference by Deborah Root defines appropriation as the act of taking something for one’s own use typically without the owner’s permission. She also says that appropriation occurs because cultural differences can be bought and sold in the marketplace. After reading this definition and thinking about my own Hispanic culture, the first thing to come to mind was how America has taken Cinco De Mayo and transformed it into Cinco De Drinko. Cinco de Mayo is an annual celebration held on May 5. The date is observed to commemorate the Mexican Army’s unlikely victory over the French Empire at the Battle of Puebla. In Mexico, it is a day of celebration full of music, native attire, dancing and drinking. However, this day in America has become a ploy for making the bar industry more money. It hones on this cultural celebration and takes away from it only the drinking aspect. Sadly, as a result it’s historical significance of this day is all but lost on the majority of Americans, who believe that this day is Mexican Independence Day.

The General is a silent comedy that was released in 1926, which was towards the end of the silent film era, resulting in a mediocre showing at the box office. However, after some time this film has now been viewed as one of the best American films ever made. The film opens with the American Civil War breaking out. The main character Johnnie Gray rushes with the masses of eligible men to be the first in line to enlist in the Confederate Army. However, his occupation as a train engineer for the Western & Atlantic Roadway is seen as too valuable and without an explanation is quickly rejected. The most interesting part of the film to me occurs when he walks out of the recruiting center and runs into his love interest Annabelle’s, father and brother. Who get the impression that Johnnie does not want to enlist which causes a negative shift in Johnnie’s life. He is then seen as being unpatriotic, a coward and Annabelle no longer wants to be with him.

Even though this is a silent film the gender roles that are depicted throughout are obvious. For that reason, I decided to analyze this film from the lens of gender. From the first five minutes into the film you immediately see what the role of men is supposed to be during this time period. It is quickly defined with Annabelle’s reaction to the news of the start of the war by asking Johnnie if he is going to enlist. Which also shows what women expected out of men during this time. When Annabelle notices that Johnnie didn’t enlist, she doesn’t believe that he got rejected and says “Please don’t lie to me don’t talk to me until you are in uniform” When analyzing the reading it shows more about the role of males throughout the 1920’s. “ads chided men for being weaklings, embarrassments to their gender, and disappointments to their wives.” ( Sternheimer, 67) These ads promised to help men get broader shoulders, bigger chest, and muscles. Which shows that men are supposed to be strong and make a woman feel protected.

Now when looking at the role of women in the film, they play the part of the “damsel in distress.” In the film the Union soldiers steal the train with Annabelle still inside. All tied up screaming for someone to help her makes women seem weak and helpless. Next, she gets rescued in the middle of the night by Johnnie and she reacts by falling back into his arms. When they return to their town he is rewarded by being allowed to enlist. Annabelle reacts by running to his side and showing him affection. This scene shows women as being shallow by only taking him back because he becomes a soldier. During the 1920’s women start becoming more independent and I believe that gender roles in movies begin to change. According to Gender trouble “Gender is not a noun, but neither is it a set of free-floating attributes, for we have seen that the substantive effect of gender is performatively produced and compelled by the regulatory practices of gender coherence. (Butler,34)

When this film released World War I had ended 7 years ago in 1918.  So, it makes sense that this film is based on war. Even though this film is depicting the Civil War that happened beginning in 1861. It continues to emphasis show the importance of men enlisting in past and future wars and how you will be depicted by women and society if you don’t.

The Seven Year Itch, the classic film that gave us the iconic image of Marilyn Monroe’s white dress blowing over a subway grate. After re watching this movie I was able to identify gender differences in a variety of ways. First, Marilyn’s character is identified as the attractive women living down the hall who seduces her shy, older, and married neighbor while his wife is gone for the summer. This shows that single attractive women are depicted to be on the prowl for men with money with no concern if they are married. However, males are portrayed as being innocent and too weak to resists the seduction of these attractive women  The female body in this film is definitely over sexualized with Marilyn Monroe being an iconic sex symbol. The parts of the bodies in this film that were sensationalized were a small waist, larger breasts, larger bottom and legs. They do this by what Marilyn is wearing in the film a low cut, tight and extenuating dress.

In this film, it portrays the gendered body as the study “Film Bodies” by Linda Williams states that “It is the female body in the grips of an out-of-control ecstasy that has offered the most sensational sight. So, the bodies of women have tended to function, ever since the eighteenth-century origins of these genres in the Marquis de Sade, Gothic fiction, and the novels of Richardson, as both the moved and the moving.”(Williams 4). I believe the iconic scene above sensationalized the idea of beauty and being sexy. It showed that wearing tight, low cut dresses, showing your legs and more skin was the depiction of sexy. This film would not have been so iconic if Marilyn wouldn’t have blown up her dress.

After reading the article, Encountering “The Other” it states “The “other” must seem not only terrible or inferior but also alluring. When contemplating over this definition and thinking about my own personal experiences with the circus. I came to the conclusion that the “other” in the circus were considered those with disabilities. Such as the man pictured above, named Schlitzie who suffers from a condition called microcephaly a condition where the face grows at a normal rate but the head does not. Giving him an abnormally small head and having him and others like him labeled as “pinhead” or “rat people” These “others” were treated this way due to their appearance and because of their appearance were displayed like spectacles in freak shows or side shows. The definition provided from the reading supports my statement that individuals with disabilities were treated as others. It was normal for swarms of people to gawk over them and find them intriguing however, at the same time not feel pity towards them due to the fact that they deemed them as diseased. The one element of the circus that stood out to me that’s in our culture today is the promotion of an event. Today during concerts or raves promoters post or pass out flyers to bring people in and excite them about a show.